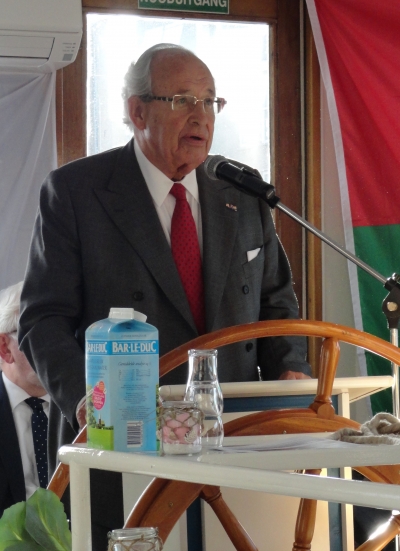 Last year after extensive discussions and preparations the board of the National Dutch Towage Museum at Maassluis decided to present an exhibition on the history and actuality of the Kotug towage company. The great question was: Is there sufficient material available to build an interesting exhibition? With the enthousiastic help of the staff of Kotug, maritime historians and a great many photographers it is now clear that the new exhibition certainly is unique and impressive.

The exhibition was opened by Mr. Ton Kooren, grandson of the founder of the Kooren dynasty in the port of Rotterdam (photo left). The grandfather of Ton, Mr. Antonie Kooren born in 1874, started his towage company in 1911 by buying a steamtug, which he named after his wife MATHILDA, soon followed by MATHILDA II and JOHANNA. The married couple (photo below) had six sons and one daughter. All sons, except for one, later on worked in the towage industry. Although the economic crisis during the twenties and thirties of last century caused a very difficult time for the company, Antonie metaphorically succeeded in keeping his head above water . The cooperation between the father and his sons became official by establishing Reederij A. Kooren and sons in 1946. However, it soon turned out that some of the sons involved thought it a better idea to have their own companies. Among them mr. Adriaan Kooren, who already worked as an independent towing agent since 1934. Adriaan purchased his first tug, the TERRA NOVA in 1947, which later on was renamed ADMA, a contraction of the names Adriaan en Marlène.

To cut a long story somewhat shorter: the company was a success and expanded by gradually commissioning more tugs, like EDUARD FRANKLIN, MARCO, ADRIAAN, JACOBA, MARIUS, FRANS and TILLY. They were all inland tugs apart from MARIUS, that had 510 hp and was commissioned in 1962. After MARIUS the second sea-going tug ANTONIE JUNIOR was commissioned in 1970. She had an enginepower of 1300 hp and sailed succesfully for the company until 1996, when she was sold abroad. In 1977 Mr. Ton Kooren, one of the sons of Mr. Adriaan Kooren and until then technical director of the company decided to start his own business. He had a visionary and keen eye on the international towage market. In 1979 Ton accepted a daring project in Mexico and loaded in Rotterdam four inland tugs on the submersible pontoon P10, that headed for the Caribbean. After overcoming many difficulties in the area the venture turned out to be a success.

Ton decided to continue his work as a broker and subsequently bought some smaller harbourtugs, one of which was BORKUM (725 hp) that was even adapted for ocean-going work.

By that time his father, Adriaan Kooren, however, noticed the special talent of Ton and pursuaded him in 1987 to return to the old business, even more: to purchase the complete company. Ton Kooren started, as usual, with a daring policy. Because of the gradually diminishing work in the field of the Dutch waterworks (like the then almost finished Deltaplan), the best option was to switch to harbour-towage. For that purpose he bought six strong, almost brandnew, Z-peller tugs in the U.S. The vessels sailed to Rotterdam and that's how on 1st January 1988 "Kotug" started. The first client was containership-owner Sealand. The activities of the old Kooren company with the new name spreaded like an ink-blot, as they say in Holland. Within a short period of time, in spite of opposition of his competitors, Kotug captured 25% of the local market.

Why being satisfied with a considerable percentage of work in the Rotterdam area? That's does not fit in with the character of the Koorenfamily. The German market was and still is quite interesting. As per 1st January 1996 Schleppreederei Kotug GmbH started in Hamburg, after three years followed by Bremerhaven. As a kind of countermeasure the German Fairplay company started to offer towage services in Rotterdam.

The fleet of Kotug grew simultaneously with the activities. Also a a new and explaining system of nomenclature was introduced. The names of Z-peller tugs, like ZP CHALONE, were preceeded by the letters ZP. Stern Drive tugs, like SD JACOBA, were named by using the letters SD. Similarly VS-tugs (Voith Schneider propulsion) ,like VS ROTTERDAM and VS HAMBURG, were showing the letters VS.

In 1999 the first Rotortug was introduced. This revolutionary type was designed by the Kotug-staff in which technically Ton Kooren played the most important role. Innovation is the magic word for these ships, which have 6300 hp on board resulting in at least 78 tons bollard pull. It's logic that among the first Rotortugs, an officially registered and patented type that now is sold worldwide, we saw names like RT MAGIC and RT INNOVATION . 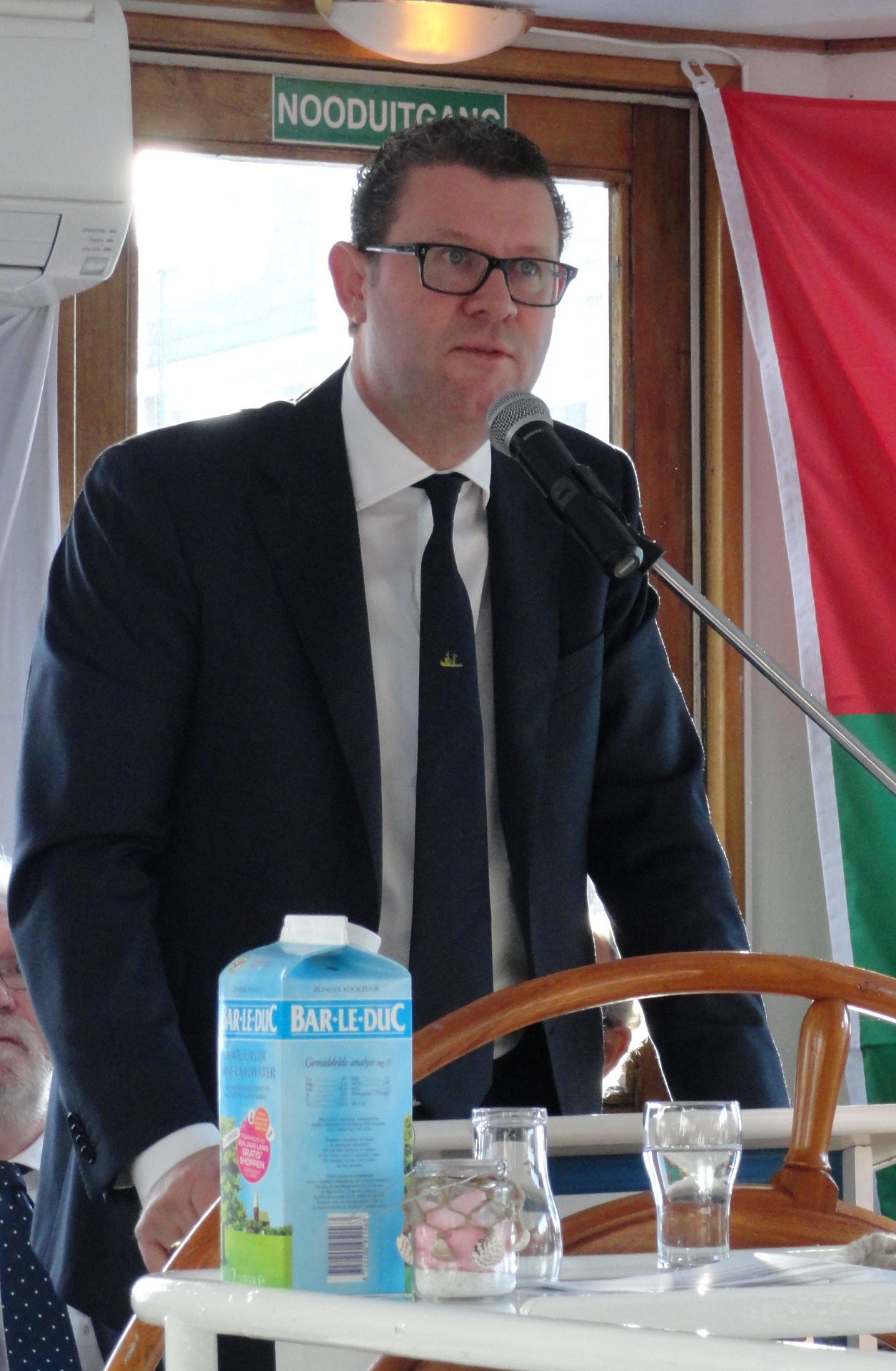 In 2002 Ton Kooren decided to exhibit his talents only in the technical field of Kooren Shipbuilding and Trading B.V. In charge of leading the Kotug company from that year is Ton's son Ard-Jan, who was already working for the company for some time (photo left).

'Nothing ventured, nothing gained" is a well-known proverb and that's how Kotug started in Le Havre in January 2006. The French authorities and unions were not pleased and although that particular part of the Kotug-fleet operated under the French flag, they obstructed the development of the company. What is wise in such a situation? It's better to stop halfway that to persevere in an error. Four tugs were sold to the Spanish Boluda company and the rest of the French towage fleet returned to Rotterdam. By 31st December 2010 the Kotug-subsidiary SNRH was liquidated.

In the history of Kotug sofar the French venture is the only disappointment. Apart from their successful RT-tugs the company purchased in 2008 four SD-tugs of the Rampart 3200 type, designed by Robert Allan. These tugs, having 5200 hp, were commissioned as SD SHARK, SD SEAL, SD STINGRAY and SD SEAHORSE.

Ard-Jan Kooren is as ambitious and enthousiastic as his father. Much publicity was generated in 2011 by converting the RT ADRIAAN into a hybride tug. A year later for the Rotterdam and German ports three Damen ASD-tugs were added to the fleet. The plans of Ard-Jan to expand the company for sure are not limited to Europe. Kotug recently started in West-African Cameroon and in the Far Eastern Brunei. In 2014 three Rotortugs were shipped from Rotterdam to that Asian region and another three units are under construction at Singapore.

The most recent development is a cooperation between designer Robert Allan, Damen Shipyards and Rotortug/Kotug, resulting in the ART 80-32 type. Two tugs of this type, RT EVOLUTION and RT ENDEAVOUR were commissioned.

At the moment more than 40 tugs are owned or employed by Kotug worldwide. So together with the historic pictures there was no problem at all to show the visitors of the National Towage Museum by means of photos the activities of the tugs with the well-known red hull and the white K on a blue surface. Apart from the fine and sometimes spectacular photographs, curiosities and a large number of ship models are shown.

Don't forget to drop anchor once you are in the Maassluis or Rotterdam area. The museum is certainly worth a visit as is the port of Maassluis, from where tugs like ADRIAAN (Koorens historic 1957 built tug with the white K in the black funnel), FURIE (1916), HUDSON (1939), MAASSLUIS (1948) and ELBE (1959) sometimes sail and in any case will cause nostalgic feelings.

For more photo's please see the Dutch version of this item ("Thema").